Analyse the pictures, respond to the questions, describe the scenes using effective vocabulary and continue the story using the starter, in the same style.

You don't need to print these out your responses can be written straight into your workbooks or onto paper.

How about a spot of performance poetry.

This poem is a narrative poem, that tells a story.

Listen to the poem and watch the animation... 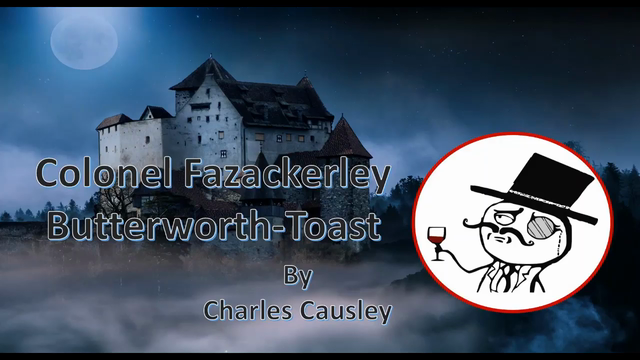 Have a go at reading, rehearsing and performing the video.

Why not record yourself doing this and send it to us, so that we can see how well you have remembered the lines.

Colonel Fazackerley Butterworth-Toast
Bought an old castle complete with a ghost,
But someone or other forgot to declare
To Colonel Fazak that the spectre was there.

On the very first evening, while waiting to dine,
The Colonel was taking a fine sherry wine,
When the ghost, with a furious flash and a flare,
Shot out of the chimney and shivered, 'Beware!'

Colonel Fazackerley put down his glass
And said, 'My dear fellow, that's really first class!
I just can't conceive how you do it at all.
I imagine you're going to a Fancy Dress Ball?'

At this, the dread ghost made a withering cry.
Said the Colonel (his monocle firm in his eye),
'Now just how you do it, I wish I could think.
Do sit down and tell me, and please have a drink.'

The ghost in his phosphorous cloak gave a roar
And floated about between ceiling and floor.
He walked through a wall and returned through a pane
And backed up the chimney and came down again.

Said the Colonel, 'With laughter I'm feeling quite weak!'
(As trickles of merriment ran down his cheek).
'My house-warming party I hope you won't spurn.
You MUST say you'll come and you'll give us a turn!'

At this, the poor spectre - quite out of his wits -
Proceeded to shake himself almost to bits.
He rattled his chains and he clattered his bones
And he filled the whole castle with mumbles and moans.

But Colonel Fazackerley, just as before,
Was simply delighted and called out, 'Encore!'
At which the ghost vanished, his efforts in vain,
And never was seen at the castle again.

'Oh dear, what a pity!' said Colonel Fazak.
'I don't know his name, so I can't call him back.'
And then with a smile that was hard to define,
Colonel Fazackerley went in to dine.